I first learned about the MG Nu Gundam Ver. Ka last year, and I was amazed at the design with more details than its previous incarnations. I wasn’t really a fan of the previous version, but was just amazed at the details and changes made to this master grade model.

In addition to its normal form, you can change various pieces of the model so that certain parts (green pscho-frame bits) are exposed to give the model a pscyho frame look. It doesn’t look really different when you change i compared to the MG Gundam Unicorn.

The model is very poseable as expected from a master grade and the weapons and shield fit perfectly into the hands thanks to a new connection system where pegs are not only found in the hands but in the accessories as well to give a very, very tight grip between the hand and weapons. 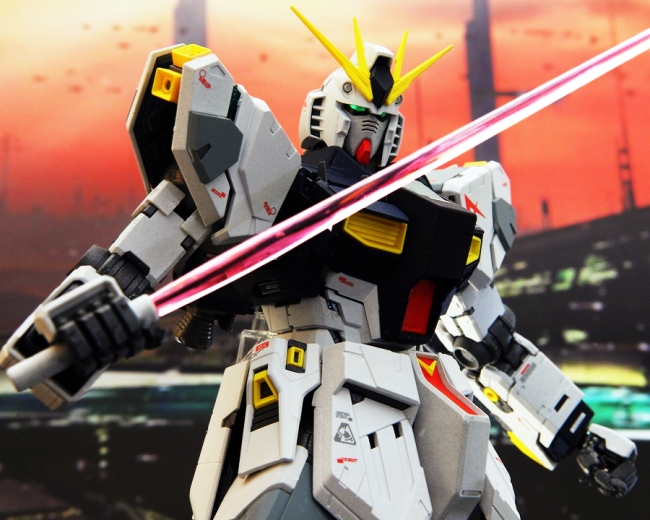 The Nu Gundam also comes with funnels that can be attached in the back, as pictured above. The funnels are used as separate attack units as seen in the movie Char’s Counterattack.

The good news is that the funnels look very impressive, especially when you attach each separate one to the stand. Unfortunately, when you combine the funnels and place them on the model’s back, they tend to very flimsy as they are all connected using small pegs to attach to one another.

I’ve noticed that when I place the Gundam on the stand and move it at an angle, all the funnels tend to bend towards the model. It’s not a very secure system, and at times the funnels have fallen from the model when I try to move it.

As I said before, the stand which holds the model and funnels is more than adequate to show this model off as it provides for a variety of poses while utilizing the funnel system.

Close up of the funnel

It’s been about three years since I put together and painted a Gundam model. The last one I posted was the Sazabi and that took months. It was refreshing to paint the model and put it together in less than 2 weeks. I think what originally put me off building Gundam models before was how much time (and MONEY!) was involved.

My next project will be the 1/144 Qubeley by Model Comprehend and I will use the same workflow as I used with the MG Nu Gundam.

Overall, I think people who didn’t like the Nu Gundam model before, will be quite impressed with this model. There was enough changes for me to take a second look and make a purchase. 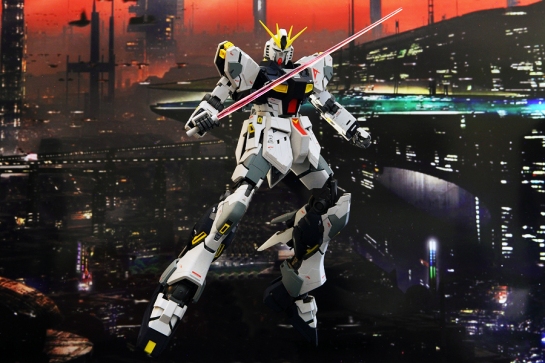 Kemeko DX and The Girl Who Leapt Through Space

Girls of The Gun